In this Argan oil extraction method, the women sit armed with a base rock and a hand-held sharp stone to start over the extraction process.

First of all, they crack each Argan fruit shell open in a very cumbersome, time- and effort-consuming process to reach the Argan oil-rich kernels.

The women roast the kernels lightly to bring out the flavor, then let them aside to cool down before they ground them into a very thick brown oily liquid, using a traditional rock grinder (R’ha) . 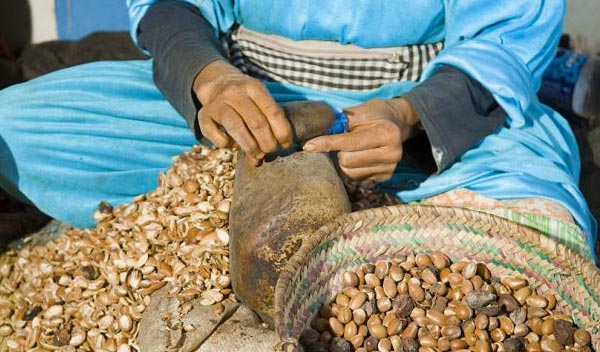 Soon after that, one of the women in the cooperative would mix the oily paste with warm water before hand-kneading in order to bring pure, unfiltered Argan oil up to the surface to finally be able to filter it.

Albeit the allegations of the “modern” industrials about the cold-pressed Argan oil, the Argan oil obtained is the same which was and still is traditionally used for cooking, as well as for health and cosmetic treatments.

To allow the solid remains as well as the sediment to settle to the bottom, the Argan oil is decanted into containers and left to rest for 2-4 weeks.

The brown dough-like hunk (local term for it: Zegmouna), left after the extraction procedure, is protein-rich and usually used for effective traditional cosmetic recipes as well as for animal feed.

As to the nut-shells, the natives are using them as charcoal (and Argan shells charcoal is one of the best charcoals out there). 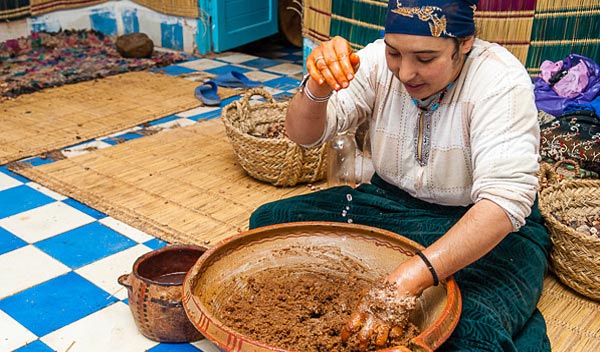 Why the traditional Argan oil extraction

Although this traditional method is pure hard work, one must not oversee its superiority over the industrial ones in terms of Argan oil quality, because of many advantages.

The extraction method Per Se is an ancestral and efficient one.

It´s clear that the yield herein is less than in the other methods, but it preserves the full potential benefits of the pure Argan oil.

In this method, the women responsible for harvesting the Argan fruits are making sure to pick only the best quality Argan fruits. This way they make sure to continuously control a top notch quality during all the processing steps starting from the collecting until the extraction by the same people.

As a result, this ensures only high Argan oil outcome.

Unlike the big scale industrialist approach — where the ready-kernels are separately sourced from different sellers, and which were more likely exposed to different environments — the prompt preparation of the Argania Spinosa kernels in the traditional Argan oil extraction lessens their exposure time to different environmental factors that cause the oxidation process.

This guarantees the best organic Argan oil quality at source.

The remaining Argan oil extraction processes can be classified under two main categories: